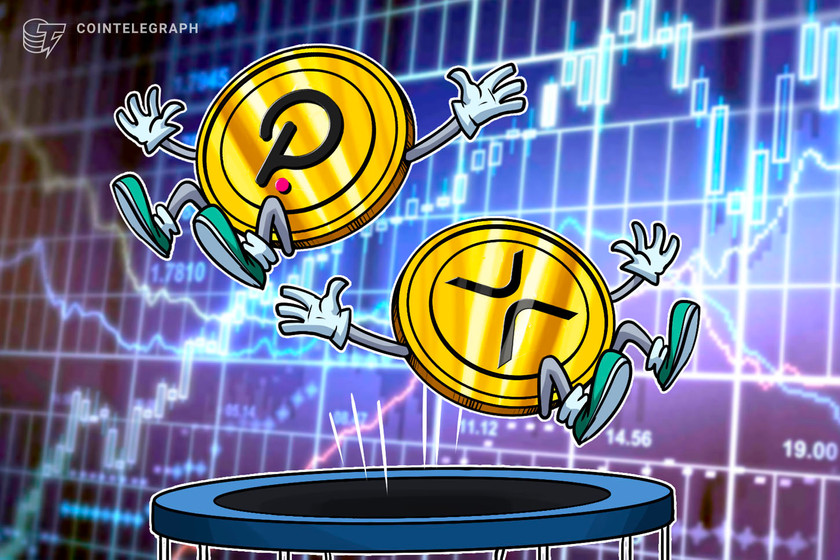 There have been some big movers as the crypto market rally resumes and Polkadot’s DOT token is one of them.

According to figures from the leading analytics portal Coingecko, DOT has flipped Ripple’s XRP in terms of market cap after a massive 26% gain in the past 24 hours. This makes it the new fourth largest cryptocurrency by market capitalization.

The Polkadot token has risen from a intraday low of just below $ 11 to an all-time high of $ 14.80 before falling slightly to $ 14.45 at the time of writing. The big price move has pushed the market cap up to $ 13.7 billion, as reported by Coingecko.

XRP, on the other hand, has only made a 3.7% gain in the past 24 hours, which was not enough to push the cross-border transfer token above $ 0.30. The market cap is currently just below the DOT of $ 13.5 billion.

Statistics of Polkadot’s own platform estimates it has an even higher market cap of $ 14.8 billion with a circulation of just over a billion tokens. Messari’s crypto statistics are very similar to this and they also show that DOT has reversed XRP with a difference of $ 3 billion in market cap.

Coinmarketcap, owned by Binance, is the only site to disagree as it reports the DOT offering down ten percent. CMC was late to mention Polkadot, a competitor of Ethereum and Binance Smart Chain.

Polkadot is essentially a multi-chain protocol that has a number of ‘parachains’ (called shards in Ethereum) and runs on its own technology called’Substrate‘, which is a blockchain framework. The platform is fully interoperable, allowing other blockchains to connect to the network as a sidechain and the blockchain protocol to process thousands of transactions per second, making it the latest ‘Ethereum killer’.

The most recent update, which may provide momentum, was the launch of the Rococo parachain testnet that went live at the end of December. It is now getting more partners according to the Polkadot community;

Other factors driving the momentum include the issues with DeFi on Ethereum as the demand for scaling grows along with a strong technical market structure.